Update and Management of TensCare's IT systems and new website !

We were recommended to TensCare in Epsom by their new office manager who we had previously worked with.Their IT support was non-existent, there was no structure, documentation or back up of any of the client data at all. Once their server was down for two weeks!

TensCare are Europe’s largest distributor of TENS machines, export to over 40 countries worldwide through retail pharmacies, hospitals and online.

We started by taking a full audit of the network and computers. We found that the server had not been backing up the data for weeks. PC security updates were very out of date and they had been given poor advice about keeping Windows XP running. We spent a weekend on site where we optimised and checked every computer. We installed four new i3 Windows 7 PCs to replace ageing XP PCs. 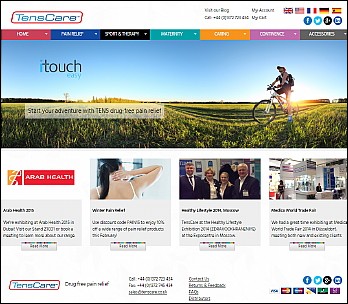 We have progressed with their IT support and replaced their aging Windows Server with a Synology Rack Mounted NAS (Network Attached Storage); installed multiple new PCs and Laptops; configured business-grade data back up to a second NAS, along with cloud back-up directly from the main Synology NAS.

We also installed cloud-managed Bit Defender anti-virus, set up five virtual PCs so that remote staff (in China and USA) can access the network in their UK/Epsom office and set up dedicated Sage data PCs.

This has all improved the running of their business; staff don’t now need to wait weeks for IT support and we now maintain and manage all their IT systems on a weekly and monthly basis.

In 2016 we migrated their aging 2007 Exchange Email system over to MS Office 365 Exchange and Business software as we also upgraded all their PCs to Word/Excel/PPoint and Outlook 2016. It took 3 days to export and import all their messages/calendars/contacts over and reset back up signatures and email settings. The project went really well and has greatly increased their working efficiency, for example it has totally reduced their spam email as each person was getting up to 70% of all messages each day being spam.

IT Upgrades and expansion

We continue to work for TensCare who are expanding and ensure they have the most up to date systems.  More recently, they’ve opened another local office and we’ve been responsible for setting up a virtual network to link back to their main head office – this has included six new PCs and users.  The set-up has been successful, and staff and customers weren’t impacted during the transition.  Their aim is to move into one big office in the future so that all their IT systems are in one place.

We have just finished upgrading all the PCs and laptops to Windows 10 which went very well.

<< Back To Client Feedback